Archangel Michael’s name means “Who is like God”. The Bible calls him “one of the chief princes” and “the great prince” (Daniel 10:13 and 12:1). Micheal is the leader of the heaven’s army of angels. He is a great warrior, who can help you fight your worries, fears and phobias. Micheal’s strength, courage and integrity is often symbolized by a sword, armor or the scale of justice. 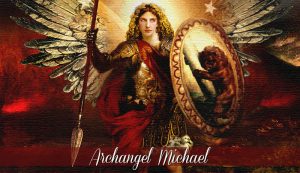 Michael is the one who helped Adam and Eve after they were expelled from The Garden of Eden. He thought them how to farm and take care of themselves. He even begged God to allow Adam’s soul to go to Heaven after he dies. Archangel Michael also appears to Sarah, Abraham’s wife.

He tells her that she bears a son. He also stopped Abraham from sacrificing his son. The last time Archangel Michael appeared in Abraham’s life happened when the archangel told him that he is going to die. Michael showed him the world and it’s wonders then took Abraham home to die next to his family.

Archangel Michael also appeared for Daniel. The archangel rescued Daniel from the lions. It is also believed that the archangel was the one who brought the plaque in Egypt. Then he freed the Israelites. Michael had many appearances in The Bible. He was the one who appeared to Joshua. So, he told Joshua that he is “the captain of the host of the Lord”. Archangel Michael‘s other appearance was for Gideon. He gave Gideon the strength to fight his foe. 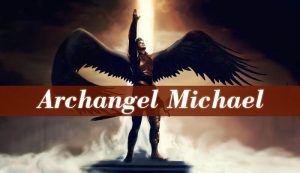 Archangel Michael appears in 3 major religions: Judaism, Christianity and Islam. In each of these religions, he is a chief angel. Therefore, he is chief of virtues and archangels. Michael is also known as the Prince of presence. He is also the angel of repentance, mercy, righteousness, sanctification and mercy.

Archangel Michael in Judaism – he is the prince of Israel, the guardian of Jacob. In Kabbalah, he has a mystery name, which is Sabbathiel. Also he is believed to write the whole Psalm 85. Also, in Jewish lore, the burning bush that Moses saw, was Michael. Who descended from Heaven. Although some sources believe Zagzagel to be the burning bush. He also appears at the burial of Moses. Having a dispute with Satan for the prophet’s soul. The other angels present at the burial are: Gabriel, Uriel, Raphael and Metatron. Michael also appears in Talmud. For example, in Berakot 35, Sarah recognizes Michael as one of the companions of Abraham.

Also in Baruch III, Archangel Michael is described as the holder of the keys of the Kingdom of Heaven. But in Christianity, this duty is done by St. Peter. Also, Regamei describes Michael as the “viceroy of Heaven”. Other Jewish legends describe Michael as the forerunner of the Shekinah. The one who brings Asenath from Palestine to become the wife of Joseph. Michael also saves Daniel’s friends from the fire. But the archangel also appears as the intermediary between Mordecai and Esther. And as the destroyer of Babylon. Other Jewish legends describe Michael as the one who informed the fallen angels of the Deluge. And there are tales about the tears of the archangel turning into precious stones. 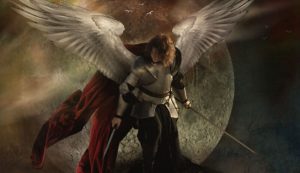 Archangel Michael in Islam – his name is Mika’il and he is the deliverer of faith. Bringing faith and strengthening ones faith in the supreme God. In Islamic traditions, Michael is believed to live in the 7th Heaven. Describing even his wings as “of the color of green emerald”. Also they continue to describe him as being “covered with saffron hairs, each hair having a million faces, mouths and tongues“. Which talk about Allah in one million dialects.

In earlier lore, according to the Koran, Mika’il is called Beshter. And he is the one who brings sustenance to mankind. But many people think that this name should be associated with Metatron. The Koran also describes how the cherubim were made of the tears Michael shed over each sin a faithful have done.

Archangel Michael in Christianity – he is St. Micheal. Also known as the benevolent angel of death. Michael leads the souls of the faithful into the eternal light. Also he brings deliverance and immortality to the faithful. Before St. George, Michael was the warrior or The Dragon Slayer. Also he weighs the souls. This duty also belongs to Dokiel and Zehanpuryu (in Judaism).

Archangel Michael is governor of Mercury. Also he fills us with patience. Another relatively recent even linked to his name comes from 1950. When Pope Pius XII declared Michael the patron of all policemen.