Archangel Metatron is the most earthly archangel. His name’s meaning is “The One Who Guards” or “The One Who Serves Behind God’s Throne”. But none of these names is certainly the meaning of his name. You should say a prayer to Archangel Metatron because he is considered the angel of life. Because he is the guardian angel of the Tree of Life. He also guards the Akashic Records or Book of Life. Metatron is the witness of the good we do and the love we give. He even writes those actions down in the Book of Life. You can also find him under other names such as: Metratton, Mittron, Metaraon or Merraton. 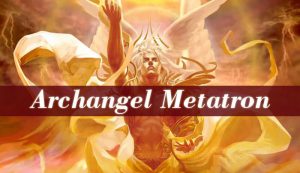 Archangel Metatron is witness not only for the good things we do, but also to the things happening in the Heaven. He records all the happenings in heaven, in the Book of Life. Archangel Metatron was a wise man ones. He was a human being like us. Seeing how wise, devoted and virtuous he was, God took him up to heaven. Archangel Metatron is the spiritual brother of Archangel Sandalphon. They were both humans on Earth. Metatron lived on Earth as Enoch and Sandalphon as Elijah. They are often told to be the twin archangels.

When invoked, Metatron appears as a pillar of fire. With his face “more dazzling than the sun”. Also, Metatron is believed to be The Supreme Angel Of Death. God gives him the list of souls that should be taken that day. Metatron gives that list further to Archangel Gabriel and Archangel Samael.

One of maybe the most important responsibilities of Metatron in Heaven is written down in The Talmud. In Abodah Zarah 3b, Metatron is the patient teacher of the prematurely dead children, in Paradise. 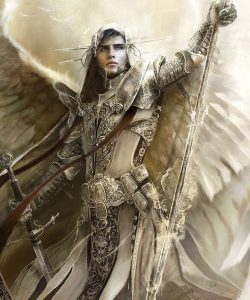 Metatron is called “The King Of The Angels” in the Zohar. It also says that he “Rules over the Tree of Knowledge of Good and Evil”. The Torah and Bible say that Enoch lived 365 years. He is taken up to heaven at that age, without dying. He was promised by God, to continue his earthly ministry in heaven forever. This way he becomes Metatron, the guardian and writer of the Book of Life. In other scriptures he is mentioned as the guardian angel of children. It is believed that Metatron was the angel who was leading the Hebrew people through the wilderness after 40 years of traveling.

According to several non-canonical writings, Metatron is the most powerful angel. In the heavenly hierarchy he is the first and the last angel. You can find him under names such as: the King of angels, the Prince of the Divine Face, the Prince of Presence, Angel of The Covenant, The lesser YHWH, the chancellor of Heaven and many more.

In The Talmud and The Targum, Metatron is the link between humanity and the Divine. Sustaining humankind being one of his main duties. Although most sources claim that Metatron was Enoch in his earthly incarnation. But there is a source, The Jewish Encyclopedia, which states something else. Archangel Metatron was originally Michael.

Metatron in The Bible

Metatron appears numerous times in the Bible. Although he doesn’t appear with his name. But he is identified as certain characters from The Bible. For example, in Genesis 32, he wrestles Jacob and Peniel. Althoguh this role is given to many other angels. Also, in Isaiah 21, he is the famous watchman. And many believe that he appears even in Exodus.

Metatron has some very powerful documents in his Heavenly archives. There is a beautiful legend about Elohim and Edem. You can find it in the Alphabet of Ben Sira. The story says that at their marriage, God (Elohim) demanded from Earth (Edem) a loan. Known as the “loan of Adam” for 1,000 years. When Earth agrees, God writs a receipt. This receipt is still in Metatron’s archives. There were only two witnesses to the event, Michael and Gabriel. 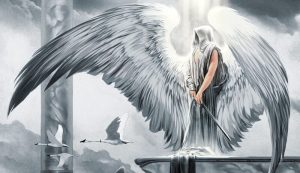 Archangel Metatron is often associated with the Logos. Logos is the creation. Others associate him with Archangel Uriel. And even with the fallen angel Sammael.

Metatron is the most important angels in Jewish Mysticism. The Kabbalah sustains that Metatron led the children of Israel through the wilderness. Hence, he became the Angel of Liberation. Metatron is also present in numerous occult texts. Which sustain that he is the twin-brother of Archangel Sandalphom. This tale is even in the Zoroastrian lore.

Enoch 3 says that Metatron is one of the tallest angels in Heaven. Being one of the 8 great princes. Each of them bearing the name of YHWH, their King. And there is a beautiful legend about his transformation from human being into a heavenly angel. He arrived in Heaven as a mortal. Then God transformed him into a spirit of fire. And then gave him 36 pairs of wings and innumerable eyes.

In the Chronicles of Jerahmeel, Metatron is the only angel powerful enough to banish the Egyptian wizards, Jannes and Jambres. Making the archangel mightier than Michael. The Yalkut Hadash sustains this theory. Saying that Metatron is appointed over Michael and Gabriel.

What does his name mean? 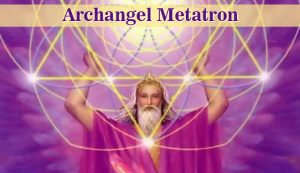 Archangel Metatron’s name doesn’t have a really certain meaning, as I said above. Some say that it might mean  “The One Who Guards” or “The One Who Serves Behind God’s Throne”. But there are others who want to know what it really means. Therefore, some believe that his name comes from the Greek word “metator”. Which translates as “measurer” or “guide to measure”. But Hugo Odeberg analyzed it more profoundly and came to an interesting conclusion. Metatron is a Jewish invention. Being a Jewish metonym for the term “Little YHWH”. And Odeberg translates it as “The One Who Occupies The Throne Next To The Divine”. Resulting in the belief that Metatron lives in the 7th heaven. Where also lives God.

Ezekiel calls Metatron on his secret name, Bizbul. But he doesn’t provide the meaning of the name.

When to call upon Archangel Metatron?

Metatron is a great teacher. He can teach you esoteric wisdom. Ask for his help when you want to clear lower energies. Metatron uses the Merkabah cube for healing. You can pray for him to come and clean you from low energies. His colors are violet and green. When you want to call him while meditating, use these colors to make it a successful calling. Pray for him when you child need help with something. Archangel Metatron is the protector of children. He pays a big attention to those kids who feel misunderstood. He is a very high-level archangel, but he will help you every time you pray for his protection. His crystal is the watermelon tourmaline. Use it when you need Metatron’s help and protection.