Archangel Jeremiel is the patron of visions, psychic dreams and life reviews. The meaning of the name Jeremiel is “The Mercy Of God”, “God’s Mercy” or “Whom God Sets Up”. He is the archangel of the prophetic visions. He also helps the souls who recently passed away and crossed to the afterlife to review their lives. Archangel Jeremiel helps all of us who are still alive to review our life and make useful changes. You can also find him under the names Remiel, Jerimiel, Eremiel, Hierimiel and others. 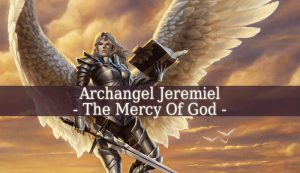 In the Jewish and Christian Apocryphal texts, he is described as the archangel who manages the true visions. Jeremiel is the angel who helps Baruch interpret his vision of dark and bright water. The archangel explains Baruch that the dark water is the sin of human beings and their bad influence on the world. The bright water represents the mercy of God and his help. After that, Archangel Jeremiel gives Baruch another vision about how the Messiah will end the sin and restores God’s intentions. The archangel is also described as the guide of Baruch in the visit he makes at the different levels of the heaven.

Also in the Apocryphal texts, Jeremiel is the angel who is sent by God to answer Ezra’s questions. The question of the prophet was about how long will we live in sin and pain until the the end of the world will come. 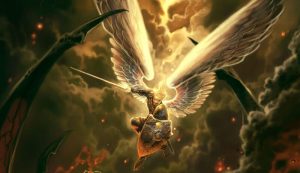 Archangel Jeremiel is also described sometimes as one of the angels of death. He helps Archangel Azrael and Michael to escort the souls of people from the Earth to heaven. When they arrived, Jeremiel helps the souls to review their lives and learn from their mistakes. He watches over the souls from the underworld.

There are certain new age believers who consider Jeremiel the angel of joy. The archangel appears in in female form to girls and women to bring them blessings and joy.

Archangel Jeremiel is one of the seven archangels and is often called Ramiel in the Book of Enoch. In these texts, Jeremiel is the angel of hope. He inspires the Divine visions and helps the souls to arrive to Heaven safely.

Jeremiel is a powerful teacher and mentor. He guides us to use love to see the real us. He teaches us to look at others with love. 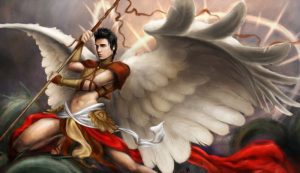 In not only one but two sacred ancient texts, Enoch I and Esdras II, Jeremiel is described the same way. He is equated with Guardian Angel Ramiel and Archangel Uriel. Meanwhile, in Esdras II, 4:36, he appears as an archangel. But the majority of sacred and Apocryphal texts describe Jeremiel as one of the 7 main archangels. Being part even of the earliest lists of the archangels.

4 Ezra describes Jeremiel as the caretaker of the souls from Hades. He also forecasts the date when the New Age will arrive. Ezra even describes a sequence with the angel. The prophet asks Ezra if the new age will come during his lifetime. Jeremiel simply replies: “Concerning the sings that you ask me about, I cand tell you in part; But I wasn’t sent to tell you concerns of your life, For I do not know.” (4:52)

Jeremiel in modern art and literature

Jermiel appears in the one-act opera called The Masque of Angels. Produced in 1966 at The St. George’s Church from New York. Jeremiel has the role of a principality in it.

Jeremiel’s many names an their meanings

Angel Eremiel – this name appears in the Apocalypse of Zephaniah. Being the angel responsible for caring for the souls from the abyss. Therefore, he takes care of each soul that got into the abyss after the great flood. Such as Jeremiel, Eremiel was also associated with Remiel. But in the Apocalypse of Elias, he appears as a reincarnation of Uriel.

Angel Remiel – often equated to Jeremiel. Mostly known as “The Lord Of Souls Waiting For Resurrection”. Remiel is the patron of thunder. Such as Archangel Ramiel and Archangel Uriel. He appears in ancient texts both as a holy angel and a fallen one. He also appears in The Apocalypse of Baruch. Which describes him as the destroyer of Sennacherib.