Archangel Gabriel is one of the only two angels that have been mentioned in The Bible, Michael being the other archangel. His name’s meaning is “God Is My Strength” or “God Is Mighty”. Gabriel is the messenger of God. He appears in The Bible as a messenger angel in important situations. But he is an important angel in other religions too. Gabriel is one of the 2 highest-ranking angels, not only in Judeo-Christian religious lore, but also in Islam. 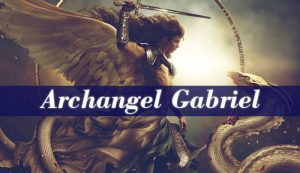 Archangel Gabriel is the ruler of the 1st Heaven. Although he is also the ruler of the Paradise or Garden of Eden. Also, Gabriel sit at the left-hand side of God. Which makes him the second most important and powerful angels, immediately after Michael.

He is the angel who visited the Virgin Mary and gave her God’s message. He told Virgin Mary that she is pregnant with Jesus Christ and to get prepared for the birth. Archangel Gabriel appeared in The Bible again as the messenger of birth. He told Zacharias and his wife that they have to get ready for the birth of John The Baptist. Gabriel also trained baby John. When he was still in the womb. 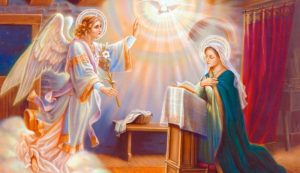 In 98 C.E. It has been discovered a letter which contained the commandments of Jesus Christ. The early church considered Gabriel the writer of those letters. Also, he became the angel of dreams and premonitions. This thing is due to the fact that Gabriel helped Daniel understand his strange dreams. Christians believe that Archangel Gabriel will be the one who will blow the horn on Judgment Day. The sound of his horn waking up the dead.

Gabriel appears numerous times in The Talmud. For example, in Sanhedrin 95b Gabriel smites Sennacherib’s hosts with a sharpened scythe. Which is believed to be ready since The Creation. He appears again in the Talmud in the tale about Queen Vashti and the election of Esther. Gabriel being the one that prevented Queen Vashti from from appearing naked before King Ahasuerus.

In Rabbinic teaching Gabriel is the angel of Justice. But De Principiis I, 81 calls Gabriel the angel of War. Jewish legends also mention Archangel Gabriel. He rescues the 3 holy men (Hananiah, Mishael and Azariah) from the furnace. Although other legends credits Michael with this miracle. Some sources sustain that Gabriel was the angel who wrestled Jacob at Peniel. Although some other sources contribute this act to other archangels such as: Michael, Metatron, Uriel, Samael or Chamuel. 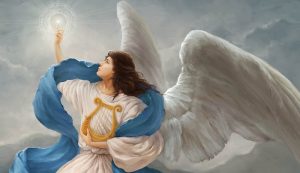 The name of the archangel is of Chaldean origin. Therefore, he didn’t enter the Jewish lore until their captivity. Being even absent from the list of the 119 angels f Parsees. The Midrash Eleh Ezkerah mentions Gabriel in the tale of the 10 Martyrs. Rabbi Ishamil, one of the 10, ascends to Heaven. There he asks Gabriel why did they deserve death. The archangel explains the Rabbi that the 10 Martyrs atone the sins of the 10 sons of Jacob. Who sold Joseph as a slave.

Archangel Gabriel is the one who dictated the Koran to Mohammed. In Islam, his name is Jibril. Mohammed even describes Gabirel or Jibril as having 140 pair of wings. Also, in Islam, Gabriel represents the spirit of truth.   Also, Gabriel was the archangel who told Noah about the flood and thought him how to build his ark. He also appeared to Abraham. Gabriel showed Abraham the black stone of the Kaba. This stone is still at Mecca. Islams also consider that Gabriel invented the coffee. He brought a cup of coffee to help Muhammad fight his tiredness. This way he remained awake and had the energy to defeat forty horsemen and also to satisfy forty women. 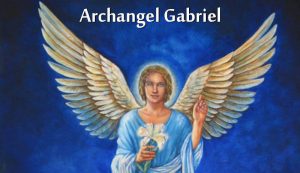 There is tale in the Koran about Archangel Gabriel. The tale says that the dust from the hoofprints of the archangel’s horse brought to life The Golden Calf. When the dust was thrown into the mouth of the Golden Calf, it came to life. Another tale from the Encyclopedia of Islam I, 52 tells and interesting story about Mohammed and Gabriel. The prophet thought considered Gabriel the Holy Ghost. Although Gabriel appears as the Holy host even in The Bible.

Archangel Gabriel in legends all over the world

In The Fallen Angels there is a legend about Gabriel. The archangel disobeyed to do a task exaclty as given. As a concequence, he fell into disgrace. During his period of disgrace, his proxy was Dobiel, the guardian angel of Persia.

The famous Joan of Arc believed that the angel talking to her was Gabriel. The archangel inspires her to help the King of France.

Archangel Gabriel is believed to be visiting Father George Rapp (the leader of a 19th century sect) and left his footprint on a limestone slab. You can see the footprint even today.

Also, in The Golden Legend, Gabriel appears as the Angel of the Moon. He brings hope to humankind.