Archangel Chamuel is known as the angel of unconditional love. He is the guardian angel of peaceful relationships. Chamuel means “The One Who Seeks God” or “He Who Seeks God”. His name defines his purpose to help those who are seeking God. He inspires people to seek God more and develop a closer relationship with him. Other names of Chamuel are Haniel, Camuel, Camael, Kamuel or Simiel. Also, he is the ruler of the order of Dominions and Powers. The duty as chief of Powers is shared between the archangel and Nisroc. 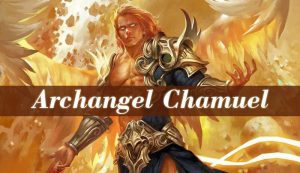 Chamuel is one of God’s archangel’s. But he is often confused with Samael who is a dark and destructive “angel”. In the Kabbalah, Chamuel has a special place. He is the archangel of the Geburah (the 5th Sephira on the Three of Life). Kabbalists say that Chamuel is one of the Seraphims. This means that he is part of the highest choir of angels. 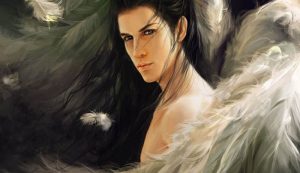 Chamuel is believed to be the angel that appears to Jesus in the garden of Gethsemane. There, the angel assures Jesus of His resurrection. Encouraging Jesus. And giving Him strength. But this role was given to Archangel Gabriel too.

Under one of his names, Camael, he appears much more in Jewish lore. For example, he is one of the Holy Sefiroth. Also, he is present in occult teachings. Being a Count Palatine, from the nether regions. The same teachings say that he usually appears as a leopard, when invoked. But the archangel also appears in the Druid mythology. And he is the God of War. According to “The History of Magic” by Eliphas Levi. Other occult teachings describe the archangel as the ruler of Mars. The planet of War. 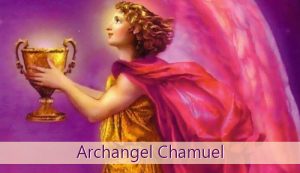 Archangel Chamuel or Camael, Khamael, Kamuel appears in numerous other occult books and texts. Being one of the most beloved angels of the practitioners of the occult.

As Kemuel, he appears in another legend. This tale describes his meeting with Moses. The prophet kills the archangel. Moses did that to prevent the Lawgiver from receiving the Torah at the hand of God. Another legend talks about Chamael as Camael. Also, it describes the archangel as the ruler of 12,000 angels of destruction. But he is also very often seen as the angel who wrestled with Jacob. Although this role mostly goes to Gabriel.

In The Kabbalah Chamuel is one of the 9 archangels of The Briatic Worlds.

Although Archangel Chamuel is mostly present in occult texts and teachings, he is not a fallen angel. He is the helper of those who seek God. Guiding you to The Divine.