Archangel Azrael is known as the angel of death. The meaning of the name Azrael is “The Helper of God” or “Whom God Helps”. As the angel of death, Azrael is the helper of those who die. But this title was given to many other angels such as: Archangel Metatron, Abbadon, Hemah, Kafziel, Kezef, Mashit and Leviathan.

He helps the souls of people who passed away to leave the Earth and get to the afterlife. Archangel Azrael also gives comfort to those who are grieving the pass away of a loved one. You can also find him under the names: Azrail, Azra’il, Ashriel, Azriel and Azariel. Being very often associated with Archangel Gabriel.

Angel Azrael is also one of the angel of destruction. The other angels “honored” with this duty are: Archangel Uriel, Angel Simkiel, Harbonah, Af and Kemuel. 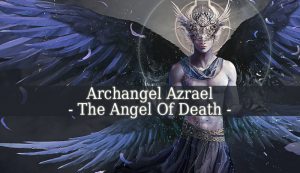 In the Islamic tradition Azrael Archangel is called the angel of death. He is literally called the angel of death in the sacred texts of the Qur’an. They call him the Malak al-Maut (angel of death). It is described in the Qur’an how Azrael finds out the dying ones names. God reveals him the names when the death is near. Archangel Azrael has no idea who will be the next one until God tells him. When he receives the name the name of the person, he starts to prepare that person. Azrael separates the soul from the physical body. Then returns the soul to God.

In the sacred texts of Sikhism, Archangel Azrael is described also as the angel of death. But this time he is not sent for dying person. God sends him to bring the souls of unfaithful people and sinners. He hits them in the head and then separates the soul from the physical body and takes it to hell.

In the Zohar, Archangel Azrael is described as the receiver of the prayers of faithful people. He is also the commandant of legions of angels in Heaven. 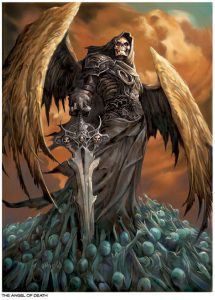 Asian traditions also describe him as the angel of death. He holds an apple from The Tree of Life at the nose of dying person. This ritual helps him separate his soul from the physical body.

Archangel Azrael is the patron of our lives. Whenever a person is born, Azrael writes down his name in a huge book in the Heaven. When that person dies, Azrael will erase his name from the book.

In Islamic traditions, Archangel Azrael, or Izra’il, is described physically. They say that he is covered in eyes and tongues. The number of eyes and tongues differs depending on the number of people alive on Earth at that moment. He also veils in front God’s creations with a million veils. He is so big, that he is vaster than the Heaven. Also he holds between his hands the whole planet. Azrael has 4 faces and four wings. Azrael is one of the 4 archangels from the Koran. The other 3 being: Jibril, Michael and Israfil.

In Jewish mysticism, Azrael is considered the embodiment of the evil. Although, The Book Of Protection, mentions the celestial being to be on of the holy angels. The other two being Archangel Michael and Archangel Gabriel.

Angel Azrael in lore and legends

Both in Islamic and Hebrew lore, Azrael lives in the 3rd Heaven. Also, Moslems believe that Azrael is just another form of Raphael. The Moslem tradition also provides a description of the archangel. Therefore, he has 70,000 feet and 4,000 wings. Also his body is covered in eyes and tongues. The number of eyes and tongues are equal to the number of people on earth. 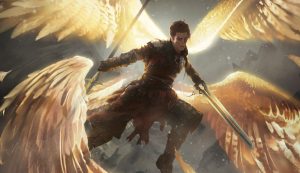 Archangel Azrael also appears in the Arabic tradition. Here we can find his duty. Describing Azrael as: “forever writing in a very large book. And forever erasing what he written. What he writes, represents the birth of a man. Meanwhile what he erases, is the name of a man who is at death”.

An ancient Persian lore describes an old tale about Azrael. It tells how got Azrael his duty to separate the body from the soul. So, Archangel Michael, Archangel Gabriel and Archangel Israfel were appointed by God to provide 7 handfuls of earth at the creation of Adam. But they failed. Only Azrael has been able to provide the earth for the body of Adam. Due to his victory in this mission, Azrael became the Angel of Death. The one that separates the body from the soul at the moment of death.

This story is also present in the Islamic lore. But it sounds a little different. The tale says that the 4 angels (Gabriel, Michael, Azrael and Israfil, brought dust from the four corners of the world. And Allah used the dust to create Adam. But for Adam’s heart, Allah uses dust from Mecca.

Another Oriental Legend describes how succeeds Azrael the process of separating the body from the soul. The angel has an apple from the Tree of Life. And he holds the apple to the nostrils of the dying. Which results in instant separation.

Also, in Jewish Mysticism, Azrael is the “embodiment of evil”. But in other sources, he is one of the holy angels. For example, in The Book of Protection, Azrael is one of the 3 holy angels of the Syriac charms. The other two being Michael and Gabriel.

The many names of Azrael 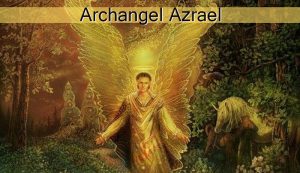 Azra’il – it is a very popular angel in Arabic lore. Being the best help in rites of exorcism.

Azriel – it is a mysterious angel from The Zohar. Often called Mahniel. He is the ruler of 60 myriads of legions of spirits. And he lives in the northern part of Heaven. The he doesn’t only guard, but he also receives prayers. In Ozar Midrashim I 85, Azriel is one of the chief angels of destruction. Also he is often found on Arabic protection charms from evil forces.

Ashriel – the name means “The Vow of God”. He is one of the 7 Earth Angels. Also known as rulers or dominions of the earth. Ashrael separates the body from the soul at death, such as Azrael. This being the main reason that the two angels are associated. Ashriel also cures stupidity, according to Moses Botarel.

Azariel – an angel of The Talmud. He governs the waters on our planet. But he also appears in occult lore. Being one of the 28 angels of the 28 mansions of The Moon.

Although he appears sometimes holy and other times evil, according to most sources, he is the angel of death. He helps the souls of the dead. Keeping the record of every birth and every death in the world.

It is recommended for a dying person to learn Guardian Angel Azrael‘s name and call on him and pray for the angel’s assistance before he dies. Azrael is also the helper and counselor of people in grief. If a loved one of yours recently passed away and you can’t bare the grief, pray for Azrael’s help to deal with the pain.

Azrael Angel also appears in numerous movies and series. The most recent appearance of the archangel was on the series Lucifer. Azrael appeared in the 25th episode of the 3rd season.