Archangel Ariel is the angel of nature. The meaning of the name Ariel is “Lion Of God”. She is the patron of the elements (water, fire, earth and wind), animals and plants. Archangel Ariel has as duty the punishment of those who harm God’s creations. She can appear in either male and female forms. You can also find her under the names Arael and Ariael. 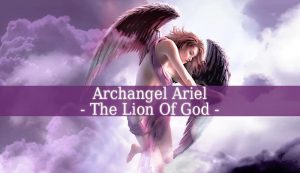 As Arael, Angel Ariel is the patron of “people of the birds”. Ariel is also very often identified with Archangel Suriel, on of the princes of the presence. Ariel is one of the 72 angels of the Schemham Phorae. The angels who have the 72 names of God. Ariel being the 46th name. The Angel of Revelations.

Ariel’s name firstly appeared in “The Testament of Solomon” (a Jewish Apocryphal text). She is mentioned as the archangel who punishes the demons. She also appears in the Coptic text Pistis Sophia. It says that Archangel Ariel is the one who punishes the wicked.Therefore, she punishes those from the “lower world”. Also known as hell, but often associated with Ur of the Mandaeans. But the role of the angel of punishment is also given to Asmodeus.

Angel Ariel is also described as the leader of the virtues, belonging to the second sphere. According to Jewish Mysticism or Kabbalistic lore, she is one of the virtues, herself. The virtues are the angels who inspire artists, writers, painters, poets, etc. Other texts consider her the patron of wild animals. Ariel is also considered by Christians the angel of new beginnings.

Angel Ariel is close to Archangel Raphael. She gets his help for healing. Archangel Ariel is the patron and healer of the animals, plants and the environment. She tries to protect and teaches us how to treat the nature properly. Other responsibilities of her are to provide healthy food, clean water, shelter and clean environment for God’s creations. 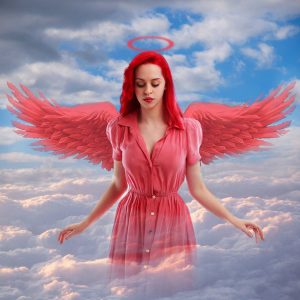 Archangel Ariel is also the patron of humans. We are also creations of God and we belong to him. You can pray for Ariel’s help when you are in the need of healthy environment, a proper shelter, food or any other supplies you need for a healthy life. She can teach you how to live in a natural way. She shows you how to respect the environment and every creation of God.

Pray for Ariel’s protection and help when you are going in the nature. She will guide you and provide you anything you need. You will have a safe and restful trip close to nature.

Archangel Ariel can help you to get in contact with fairies or elements (the little angels of the nature). If you pray for her help, she will bring you closer to them.

She is the healer of animals and plants. If you have a pet or domesticated animal, bird or fish, call upon Ariel. She will have the support of Raphael in case to heal him/her/it. Sometimes the heal can take only minutes because both of the archangels are powerful.

Be brave and start to pray to Archangel Ariel to help us heal the Earth. She can heal the environment and teach you to respect nature.

Cornelius Agrippa known about Angel Ariel and he described her sometimes as angel, other times as a demon. He said: “Ariel is the name of an angel, but sometimes also of a demon, and of a city, called Ariopolis, the place where the idol is worshiped”.

Angel Ariel in the occult and magic 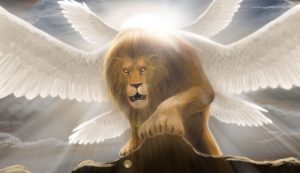 Angel Ariel appears in numerous texts about magic, mysticism and the occult. A few examples are: the Apocryphal Ezra, The Greater Key of Solomon or Grand Grimoire. Ariel is often pictured in these books and teachings with a lion head. And being the ruler of the zodiac sign Leo.

Also in Jewish mysticism, the name Ariel was some kind of poetic name for Jerusalem.

According to The Cabala, there are 72 angels, each having his own verses. Ariel’s verse sounds like this:

“The Lord is pleasant to all the world and His mercies are over all His works.”

Archangel Ariel in ancient and more contemporary texts and books 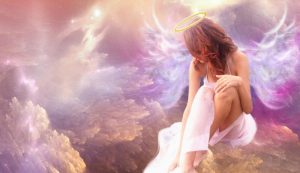 Angel Ariel is a really complex angel. Appearing both as angel and as demon. This is mostly the result of her popularity. There are numerous biblical, Gnostic, apocryphal and even occult references to the angel.

The name Ariel appears appears numerous times in The Bible. But never describing an angel. Therefore, The Bible uses the name Ariel to denote a man, and altar and even a city (found in Isaiah 29).

In The Hierarchy of The Blessed Angels, Angel Ariel is one of the princes that rule the waters. The same book calls Ariel “The Earth’s Great Lord“.

In the “Wisdom of The Chaldeans”, Angel Ariel is the assistant of Raphael. They cure disease together.

In Isaiah 33:7, we can find the so called erelim or arelim. Sayce in “Athenacum” (from oct. 1886) explains a connection between Ariel and the choir of angels called Arelim. Which is equal with the order of Thrones.

Ariel also appears in the Neoplatonic Greek culture. In that time, the Greeks believed in so called elementals. And they grouped the elementals according to the four elements of life. Therefore, there were the elementals of earth, water, air and fire. Ariel being the ruler of the earth elementals. Which were little earth gnomes. 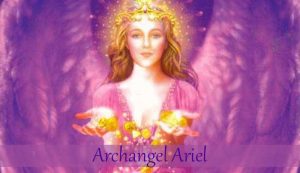 Angel Ariel in art and literature

The angel appears in Shakespeare’s The Tempest. Where Prospero casts the angel as a sprite or fairy. And Ariel does magical acts according to Prospero’s instructions.

Angel Ariel also inspired Milton. Who considered the angel a rebel one. She has been overcome by the Abdiel, the Seraph. The rebel Ariel has been conquered by Abdiel in the first day of War in Heaven.

Ariel also appears as a poem, written by Maurois about the life of Shelley. The poet Shelley often referred to himself as Ariel.

Goethe also mentions the angel. Having a little part in Faust. Ariel appears in Part II, when Faust wakes up in a charming landscape. This landscape was filled with fairies. And there was also Ariel.