Firstly, the Angel Hierarchy is very complex. It contains three spheres. Each spheres also contains three categories of angels. The first sphere is the closest to God and the third sphere is the closest to us. God created these celestial beings to help him create and control the world. Each one of the angels has its attributes and responsibilities. The Angel Hierarchy is clear and beautiful. 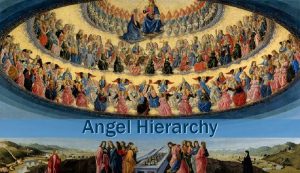 Seraphims – The word “seraphim” means the “burning one”. Isaiah, the prophet who visited The Heaven, saw every kind of angels. He described seraphims or Seraphs as celestial beings with six wings covered in light. They use two wings to cover their eyes. They cover their feet with other two wings. And the remaining two wings help them fly. They are the caretakers of God himself. They are venering and praising God constantly.

Cherubims – They are the guardians of the throne of God and the Garden of Eden. So, they are described as celestial beings with four faces (man, ox, lion and eagle). They also have four wings, each one of them covered with eyes. And they have the body of a lion and the feet of an ox. These weird looking celestial creatures were described in such a detailed way by Ezekiel. It is believed that the falling angel was once a Cherubim.

Thrones – They are the celestial beings who have the responsibilities linked to justice and authority. They are the caretakers of the Throne of God. Therefore, the Thrones are the patrons of God’s justice and judicial power. The thrones are associated with the Ophanims (Jewish). They look like a wheel within a wheel. The wheels’ rims were covered with hundreds of eyes. They appeared in one of Daniel’s visions.

Second Sphere (governors of every creation)

Dominions – They are the governors of other angels. They have the responsibility of regulating lower angels’ duties. Therefore, they are often called lords or lordships. They are believed to look like beautiful humans with a pair of wings, covered in divine light. The only thing that make them look different by the common angels is the orbs of light that appears at the heads of their scepters or swords.

Virtues – They are the creators of miracles. And they are also the most powerful celestial beings. They have the Divine Strength to create any miracle in this world. Therefore, they have the power to heal any sickness and foretelling our future. These creations from the Angel Hierarchy can directly help us human beings. They can fill us with patience, courage, humility and strong spirit. They can help us recognize God’s strength and believe in his love.

Powers – They are the Divine Warriors. Their responsibility is to fight the evil spirits. They are guardians of The Heavens. The powers supervise every movement of the celestial beings and the evil spirits. They try to maintain the safety and harmony of the God’s Kingdom. So, they are depicted as beautiful celestial beings wearing armors, helmets, weapons and shields. Therefore, they are the army of God.

Archangels – They are some kind of chief angels. So, each one of the archangels have his group of angels to guide and take care of. They are the most popular angels. Because, they appear the most to humans. The Archangels are also messengers of God. They are present not only in the heavenly world, but also in the physical one. Some believe that there are only four archangels. Others consider seven archangels, and even nine or more. The most common archangel names we meet are: Ariel, Azrael, Chamuel, Gabriel, Haniel, Jeremiel, Metatron, Miechael, Raguel, Raphael, Raziel, Sandalphon, Uriel and Zadkiel.

Angels – They are represented by the lowest category of angels. They are the most present and recognized in our lives. Our guardian angels belongs to this angels order. They are categorized by the things they do. There are angels of the elements, angels of nature, angels of feelings, emotions, etc. There is an angel for everything ever created on earth. So these angels have different functions, having the knowledge only for their own function. So they are not as powerful as a virtue. They guide us and protect us. Those in this category of the Angel Hierarchy are the most closer to us.