Eleleth is a highly important character in Gnosticism and Gnostic lore. He or, maybe she, is also known as Heleleth or Sophia. Being the Angel of Peace, Perfection and Wisdom. There is a whole story that this angel is part of in Gnosticism. Being one of the 4 luminaries or aeons.

Eleleth in the story of The Trinity in Gnosticism 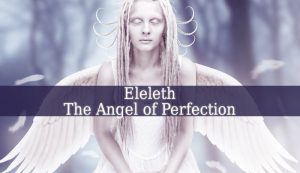 This story can be found in The Apocryphon of John. He describes that, in the beginning, there was one single holy and immaculate spirit. This spirit was and still is indestructible and eternal. After a while, he creates by though, the feminine version of himself. She is also known as Barbelo. But she had only 5 of the first spirits properties: she was also invisible, she possessed foreknowledge, she was indestructible and she had eternal life and truth.

The Gnostic Trinity is born when the two spirits of light ignite a spark creating Autogenes. Who is also known as The Aeon Christ or The Anointed One. When the trinity is complete, they start to create new aeons. More specifically, 4 more aeons or luminaries. Eleleth is one of them.

There are 4 luminaries created by the first spirit and Autogenes. They are:

They are all created to serve Autogenes or Christ. In Christianity the luminaries or aeons are also known as angels. There were 4 other types of beings created. Each type lived with one of the four luminaries. Eleleth lived with the Souls. Also known as those beings who didn’t attain gnosis yet.

This tale comes from the times of Noah. When the archons decided to destroy humankind. When Noah’s ark is done, Norea attempts to board. Angry, she blows into the vessel, and catches fire. This happens 3 times. The archons see her power, and decide to capture her.

One of them was Yaldaboath, but Norea knew who the creature was. And that he was a being of darkness. The archon gets mad and tries to rape the girl, but Eleleth arrives to save her. After frightening the archons away, he reveals Norea her true origins, being a descendant of God.

Share
Previous Dumah
Next Who Are The Grigori Angels?