Abdiel is one of the most loyal angels in God’s service. He is mostly known because he stood up alone against Lucifer in the first days of the battle in Heaven.

Is Abdiel a real angel?

There is a theory that says that Abdiel was invented by Milton, the author of Paradise Lost. But that is not true. Because the angel’s name can be found in much earlier writings, such as The Book of The Angel Raziel. Which is a cabalistic text traced back to the Middle Ages.

Who is Angel Abdiel?

He is a holy angel of God. He belongs to the choir of angels known as Seraphs or Seraphim. And he is one of the most devoted and faithful holy angels of God. His name means “Servant of God”. 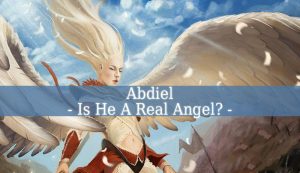 Abdiel and the rebellion of angels in Heaven

Did you know that he had a key role in the battle between the rebelling angels and the holy ones? He alone forced the rebellious angels out of Heaven. And he even attacked Satan (Satanel) with his mighty sword.

Abdiel in The Bible

Is Abdiel an angel? Is he holy? The sources are limited on this angel. On the fictional part, Abdiel became a very popular angel, appearing in different books, movies and shows. But as a real angel of God, there are no sources on him.

Therefore, should you pray for Abdiel’s help? I don’t recommend praying to any angels, besides the archangels. Mostly, when we are talking about Abdiel, who is mostly an angel created by the entertainment industry.

Share
Previous Nuriel – The Angel of Hailstorms and Spellbinding